skip to main | skip to sidebar

IN MEMORIAM OF DUNCAN SHIELS

Duncan Shiels, one of the pioneering band of foreign correspondents who covered 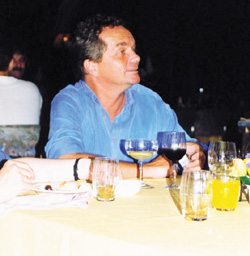 the change of regime in Hungary, died peacefully on Thursday evening, Oct 19, in Princess Alice Hospice (Esher, UK), after a battle with cancer. His family and a few friends were with him. He was 53. . The founding president of the Hungarian International Press Association, Shiels had lived in Hungary from 1986 to 1998. Under the last years of Communism he taught English and French, was a member of the Hungarian dissident performance band Art Reaktor, and a freelance writer.
In the 1990s, he wrote a column from Budapest for the UK’s Daily Mail (part of the same group as The Budapest Sun), but is perhaps best know through his reporting for Reuters. When he left Hungary (he remained a frequent visitor), he worked for the agency in London, and devised and taught a worldwide journalistic training program for the Reuters Foundation.

Latterly he had been writing a book, Les freres Rajk (The Brothers Rajk) It has just been published in French, with the official launch due at Paris’s Hungarian Institute on Nov 7. It will be published next spring in Hungarian, German and Spanish. There is, as yet, no definite contract for the book to be published in the language it was originally written, English.
The work tells the story of the Rajk brothers (one a Communist, the other a Fascist), the father and uncle of László Rajk, the architect, former dissident and leading figure of the Free Democrat SzDSz party.

Friends, many of whom had not been aware of how ill Shiels was until a few days before his death, recall a man who was, above all, considerate and generous. “I remember Duncan was the first friendly face I saw when I came to Budapest,” said David Sterling. “He was so very generous to help us get settled in and always had the time for stupid questions.”
Sterling also has a story about the one and only time he rode pillion on a motorbike, driven by Shiels. The bike crops up in other stories too. “Which other Budapest motorbike rider would end up being directed, in error, by traffic police into the heart of a high-speed police motorcade accompanying a Royal visit to Budapest – with all the fun of zooming all the way up the Danube and across the bridges with loads of flashing lights and people waving?” asked the BBC’s Meriel Beattie.
The happy ability of being in the right place at the right time had stayed with him, though he was modest about his role as a stand-in for Alec Guinness in the film of A Passage to India, Beattie said. With no particular plan of how to spend Millennium Eve 2000, he found himself in London’s Millennium Dome, at one point standing next to – and chatting with – the Queen.

“This sort of thing just happened to Duncan all the time, perhaps because he was such an instantly likeable, trustworthy person, who made all kinds of people feel comfortable,” she continued.
She also recalled his his “inexhaustible patience and sympathy.... Sitting in a restaurant one evening, I overheard him leave a message on the answering machine of a friend who couldn’t join us because she was going through a rough patch.... ‘Just give a call,’ he said. with that reassuring voice. ‘I’m open 24 hours.’ And he really was.”
His frequent visits back to Budapest meant he continued to make friends here, even after 1998, with people such as Dan McLaughlin of the Irish Times. “I met Duncan only after leaving Reuters, a news agency for which he worked for many years and which prides itself on the kind of integrity that he possessed in abundance – an integrity that he instilled in young journalists from dozens of countries through the training courses that he devised and taught for Reuters around the world,” McLaughlin said.

With thanks to Robin Marshall, Budapest Sun
Posted by HIPA at 12:53 PM